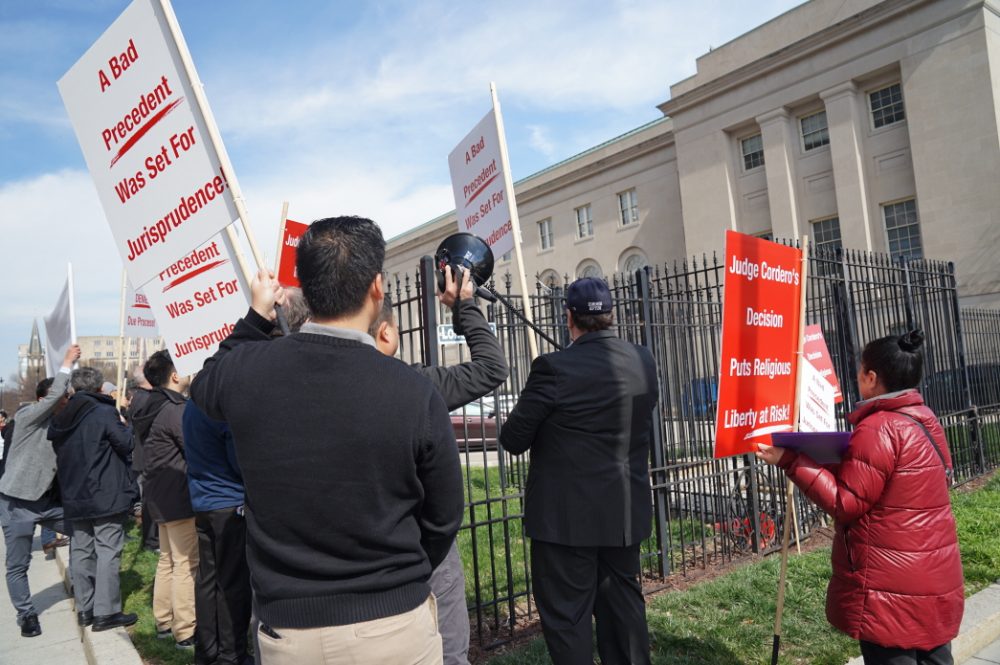 My name is Dr. Chieko T. Self. My doctorate is a Doctor of Ministry. I came from the Seattle, WA area, to register a strong protest against the Summary Judgement ruling made by Judge Laura Cordero in case number 2011CA 003721B (Family Federation for World Peace and Unification v. Hyun Jin Preston Moon)-also known as “The UCI Case.”

I firmly believe that Dr. Hyun Jin Preston Moon is the one who carries on the message and mission of the late Rev. Sun Myung Moon.

However, without justification, Judge Cordero ruled against Dr. Hyun Jin Preston Moon and the UCI Board. In doing so, she denied basic First Amendment rights as well as due process to the defendants.

I would like to stress that this case is about a religious schism which occurred due to a dispute of theology within the Unification Movement.

As clearly a religious matter, this dispute cannot be decided by ANY court.

As the original judge, Judge Josey-Herring had ruled in 2013, the matter now is clearly about the issue of religious freedom.

I must protest strongly that this case was wrongly considered by Judge Cordero to be an ordinary organizational or financial dispute. The root cause is however obviously a religious issue.

Judge Cordero used the concept of “NEUTURAL PRINCIPLE OF LAW” to justify her strange ruling.

In other words, Judge Cordero is saying that this religious dispute can be ruled without considering the root cause: freedom of faith.  This is directly contrary to the First Amendment, and therefore CAN NOT BE ALLOWED TO STAND!

Tragically, Judge Cordero made such an erroneous decision.

Should the Judicial System of the United States allow such a miscarriage of Justice?  Such a wrong precedent will cast a long shadow into the future for our precious religious freedoms.

Freedom of religion is our most basic right as human beings.

Isn’t religious freedom guaranteed by the Constitution of the United States? Yet this basic right has been violated here at this Superior Court!

I have been with the Unification faith, which is at issue here, since I was 16 years old. I was a high school freshman. I joined by my own volition even though I was very young. This year I will be 70 years old.

Though I was young, I was deeply moved and inspired by Rev. Moon’s teachings. He taught us about the love of God; that God is our Parent.

There is One God who is the Creator, Who prepared this world with the utmost care for His children – that is, all of us are His children. We humankind are brothers and sisters.

Sadly, the family of God was lost as the Bible says. But now, we are here to rebuild God’s ideal world; a peaceful, loving and caring world.

Hearing his teaching was an earth-shaking awakening to me. I felt so much hope for humanity that I never felt before.

The root of this Court Case is about the unfortunate schism within a new religion.

FFWPU has maliciously altered Rev. Moon’s theology – which is totally unacceptable to many thousands of Unification members.

My whole life of faith is at stake here! As well as for many thousands around the world. Religious matters must be dealt with in a proper manner.

Again, isn’t Freedom of Religion guaranteed here in the UNITED STATES?! This is why the first Judge, Josey-Herring originally dismissed this case in 2013 on religious abstention grounds.

Judge Cordero ignored a large volume of documentation and facts collected through depositions and court appearances over a number of years.  This case started way back in 2011!

Judge Cordero was the third judge to suddenly come into this long case. She issued her judgement without due process and spent only a short time to make her ruling.

Together with many thousands of my brothers and sisters of faith around the world, I call for the case of FFWPU v. Dr. Hyun Jin Preston Moon to be DISMISSED!