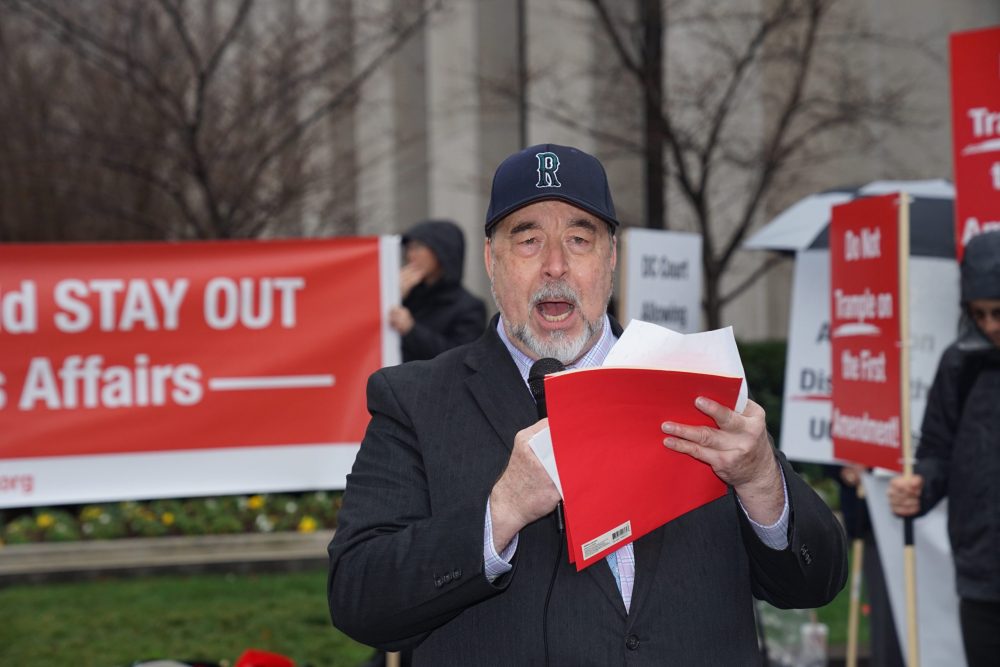 I am the Reverend Howard Self and I have the honor of emceeing this rally today.

Today, we are gathering here at the DC Superior Courthouse to strongly protest recent decisions by judges in this courthouse that are threatening to illegally and unconstitutionally facilitate the hostile takeovers of non-profit boards in the district!

Our speakers today will be drawing your attention to the infamous Family Federation for World Peace and Unification vs Hyun Jin Moon and the UCI Board court case… also known simply as “The UCI Court Case.”  In this oppressive, nearly nine-year-long court case, we have seen rulings that blatantly ignored the 1st Amendment rights of the UCI Board. In addition, a series of judges have denied proper judiciary due process to the defendants.  Instead of following the hallowed principle of “Innocent Until Proven Guilty,” this court has forced the defendants of the UCI court case to, in effect, prove their innocence. This reversal of proper judicial practice must not stand!

Indeed, this disregard of the 1st Amendment and failure to practice proper due process by this court’s judges are decidedly intolerable to a citizenry raised on the principle of religious freedom and justice for all.  The 1st Amendment clearly states that a dispute within a religious entity, where there is a strong element of theological dispute, CAN NOT be settled within any court.

Yet, Judge Laura Cordero completely ignored the 1st Amendment in a Summary Judgement in this case, where she took it upon herself to declare which group in the religious dispute was bona fide and which was illegitimate! This is judicial destruction of one of our Constitution’s core principles! In her summary judgement ruling against UCI, Judge Cordero enabled the plaintiff, Family Federation, to perpetuate a probable hostile takeover of the sitting board of a religious non-profit. IF this precedent is carried out, then all non-profit boards in the entire District of Columbia, and potentially throughout America, will be under the same threat! In other words, if a Court can affect the hostile takeover of one board, ignoring the Constitution, then courts can take over ANY non-profit board! Today, we call on the non-profits of the District and all freedom-loving citizens to join us in this protest of the abuse being perpetrated by this court!

Now, as we gather here today, the decision is in the hands of Judge Jennifer Anderson.  Judge Anderson can correct the blatantly unlawful ruling by Judge Cordero and rule correctly that this is a religious dispute that cannot be decided by the courts under the 1st Amendment. Our speakers today are united in demanding, Judge Anderson, DISMISS THE UCI COURT CASE NOW!