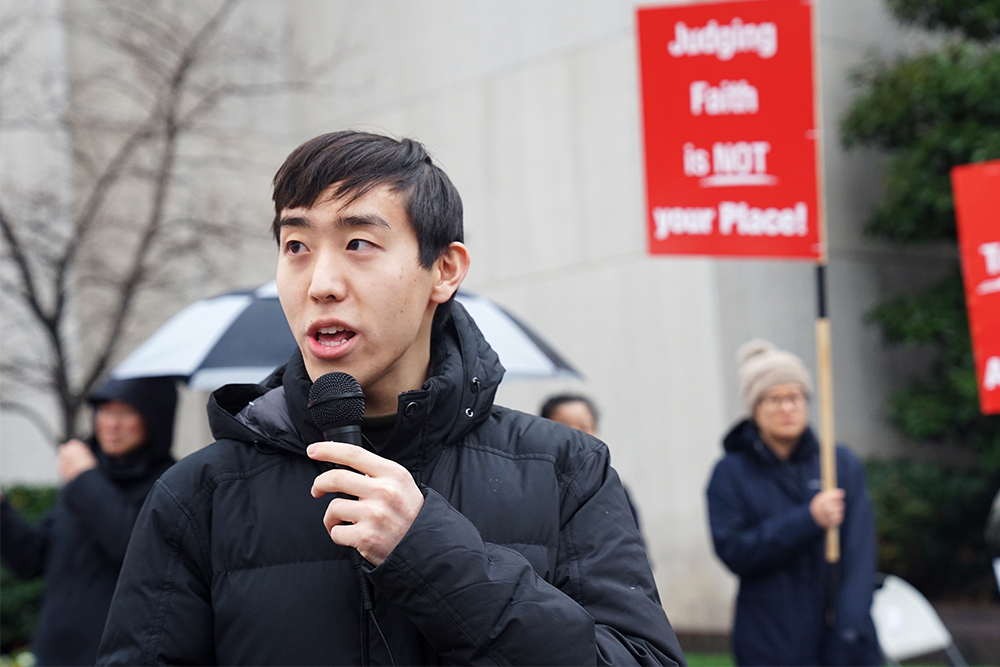 I am a person holding spiritual principles and values. I believe not in a religion, but in a spiritual lifestyle practiced by Rev. Sun Myung Moon. I was born into the Unification Movement. I personally believe, after my own seeking, that Dr. Hyun Jin Moon carries on the legacy of the late Rev. Moon. I am here today with fellow members of my spiritual community, to stand against a grave injustice.

Based on the teachings of Rev. Moon and his son, Dr. Hyun Jin Moon, my family instilled me with principles and values of service, leadership, and breaking down barriers in the world toward peace. Because of this, I have been involved in many nonprofit organizations striving to practice service and peace efforts.

I have especially had strong involvement and interest in youth related efforts. For many years, I have been involved, and led, numerous youth efforts in leadership, service, poverty relief, interreligious unity, and character education.

I work with students and young professionals who all seek to uplift our spiritual values as human beings.

I am also a scientist. I combined my youth, service, and science backgrounds, and work to provide cutting-edge 21st century biotechnology skills to disadvantaged youth. These students show that youth are not just the future leaders of tomorrow, they are leaders of the present day.

All these, I am doing based on the inspirations and teachings I have received from Rev. Moon and Dr. Hyun Jin Moon, and my family, who have raised me to hold such high and lofty values and reach for high endeavors.

I heard about the UCI case early on. Upon my own initial research and understanding that there were legal experts to evaluate the proceedings, I trusted the judicial system. I believed in the power of the judicial system to uphold fair and just evaluation of all sides, and I believed that ultimately, the case would be thrown out on religious grounds. In fact, I was right. In 2013, Judge Josey-Herring, dismissed the case on 1st Amendment grounds.

In 2018, after an appeal by the Family Federation a few years prior, Judge Cordero issued a summary judgement, I looked at the case again. I was shocked to see that the court discredits and ignores how the Unification Movement has evolved in teaching by Rev. Moon.

By dismissing the fact that the UCI case is fundamentally moored to the fact that the Board members, members of a spiritual movement, were acting in accordance to the Founder’s theological desires, is a blatant slap on the face to all I and our movement have done. After some of our families have even been physically and psychologically persecuted by Family Federation members for holding firm to a different set of believes, we were shocked.

Together with other families and friends I found holding similar sentiments, we started a letter writing campaign, appealing to the Court that our faith community exists, that we are not just a rich family’s feud, and that this judgement has deep implications on how our RIGHT TO BELIEVE is policed by the court system. I really had faith that such letters would be considered by the Judge at that time. These letters also led to the creation of a website I started, righttobelieve.org.

When we got word that the court requests the letters to stop, we thought it was due to them considering the contents, but nothing really happened, and now the case has moved onto remedies.

At this point, I have realized two things:

First, I believe it is time to finally act. Too long have I and other families stayed silently towards effects that this UCI case has created. It has directly affected us based on an injunction issued by the court and the kinds of broad-stroke implications it makes about our right to believe. Myself, and all others here, have individually decided to be part of this call of injustice.

Second, I have come to realize that this ruling has a threatening implication to many people of faith. If the court can impose neutral principles so easily, based on the narrative of one theological group’s side, does this not set a precedent for any religious groups facing similar legal threats by groups of mal intent? This case sets a new precedent, that given enough years, money, and intimidation, one theological group can convince the court system to buy into their narrative and let the other theological group’s founder become helpless.

I ask Judge Cordero and Judge Anderson, please, give us the right to believe.