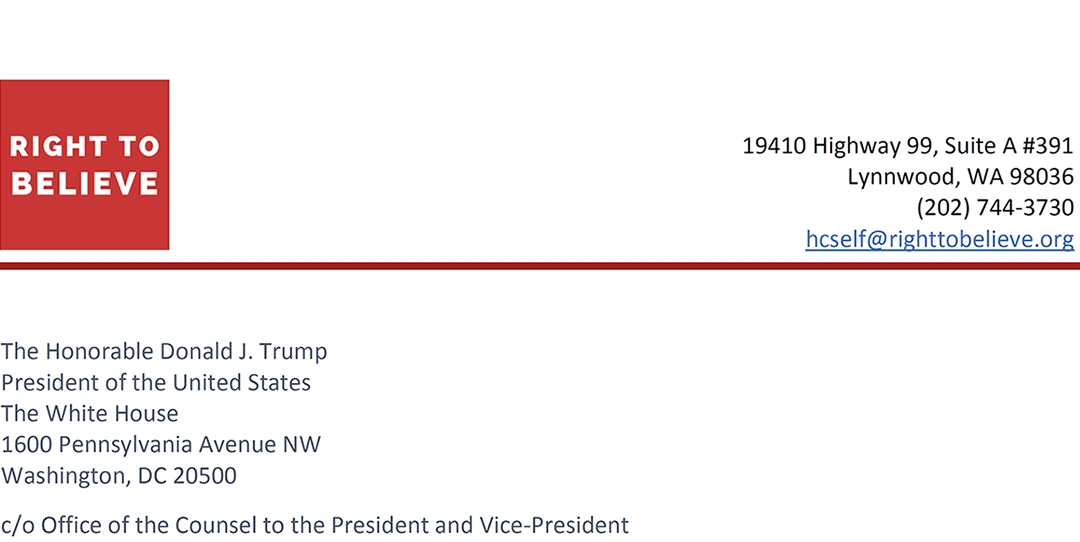 Office of the Counsel to the President and Vice-President

My name is Howard C. Self and I live in the state of Washington. I represent “Right to Believe,” a not-for-profit organization whose mission is to uphold the fundamental rights of religious freedom for all.  “Right to Believe” includes tens of thousands of individuals who are fighting to protect the right to believe in one’s religion without undue governmental interference. As you both are aware, there is growing concern in our nation about the unconstitutional overreach of the judiciary in religious affairs. We are grateful, Mr. President, for your valiant efforts to defend the First Amendment in the face of judicial decisions in courts around the country that are collectively eroding individuals’ rights and freedoms.

I write to inform you about a travesty of justice recently committed in the District of Columbia Superior Court. Tens of thousands of people, including myself, have suffered religious discrimination at the hands of Judge Laura Cordero of that court. Judge Cordero issued an unconstitutional summary judgment ruling in the case, “Family Fed. for World Peace and Unification vs Hyun Jin Moon, et al” (No. 2011 CA 003721 B), which effectively gave legitimacy to one religious faction over another in an ongoing religious schism within the Unification Church, or Unification Movement. As often happens within new religions, the schism became heightened with the passing of its founder, Reverend Sun Myung Moon. Now entering its ninth year, the case explicitly involves questions of religious polity, structure, and theology. Judge Cordero’s unconstitutional ruling on this case not only trampled on the First Amendment rights of the defendants, but also on the rights of people of faith worldwide.

Compounding this injustice was the recent decision to award Judge Cordero with a “well qualified” reappointment on April 27, 2020 by the DC Commission on Judicial Disabilities and Tenure (the “Commission”). This decision was rendered in spite of her numerous judicial errors and 5,000 emails to the Commission objecting to her reappointment.  Though 5,000 people of faith collectively decried her religious bias and discrimination against their faith, their voices were summarily dismissed by the Commission.

Cordero’s reappointment should have been at the discretion of your office, Mr. President. Regrettably, it appears that the Commission is one of the entrenched governmental entities determined to maintain the status-quo of the DC “swamp” by preventing your office from exercising its authority to appoint competent and honest judges. A quick check on this Commission’s record concerning reappointments shows that 31 judges have come up for review in the last 13 years, and that every single judge was given the “well qualified” designation, effectively ensuring that the decision-making process never leaves the Commission’s authority and never reaches your office. The “well qualified” designation is reserved only for those judges “whose work product, legal scholarship, dedication, efficiency, and demeanor are exceptional” (page 2). Yet, Judge Cordero’s work product and legal scholarship are far from exceptional and the official report of the Commission is fraught with misrepresentations and outright untruths. I believe that Judge Cordero gave the Commission false information about the cases she handled, which then allowed the Commission to give her an unjustified qualification; one that would circumvent the President’s constitutional right to determine her reappointment. This is a profoundly disturbing situation because citizens of the District of Columbia will be served by an unqualified judge who was reappointed through a corrupt process. Moreover, U.S. taxpayers will be forced to pay for Judge Cordero’s lucrative pension for the rest of her life.

The Commission, for its part, completely failed in its responsibility to vet her statements and submissions in a meaningful way. The Commission’s report is attached to this letter, but it can also be found online: https://cjdt.dc.gov/node/574282

Judge Laura A. Cordero was nominated by President George W. Bush as an associate Judge to the Superior Court of the District of Columbia on May 20, 2004. She has a prosecutorial background and served as a Judge in the Civil Division of the Superior Court of DC, as well as in the Domestic Violence Unit and Family Court, dealing mostly with issues involving domestic matters (abuse, neglect, adoptions, divorce, etc.)

In her submission and what I assume are her statements to the Commission for her evaluation for reappointment, Judge Cordero presented three cases as “exemplars” of her work (page 3). Two of the three “exemplars” are evidently from the case in question. The Commission’s report states that these cases were “difficult” and “complex”.

As a judge who took an oath to obey the Constitution, Judge Cordero failed to follow proper judicial procedure for a summary judgment. In a case where facts are highly disputed by both parties, the rules for summary judgment require the party seeking summary judgment to show that there is no genuine dispute as to any material fact, and that that party is entitled to judgment as a matter of law. However, Judge Cordero did the opposite, taking the plaintiffs’ fictional narrative, which the facts from discovery do not support, as the template for her decision—completely disregarding the defendants’ position or the disputed facts. At a minimum, Judge Cordero should have held a hearing and should have used the proper procedure for summary judgment. She did none of these things.

In addition, Judge Cordero’s sloppy handling of the case resulted in the unlawful incidence of a sitting judge unilaterally deciding on the structure, doctrine, hierarchy, and leadership of a religious body in the midst of a schism. She blatantly favored one side’s claims in a religious dispute over the other side in her decision. In doing so, Judge Cordero not only violated the basic Constitutional rights of religious freedom of those involved, but affected the lives of tens of thousands of individuals (myself included).  The glaring fact, that both Judge Cordero and the Commission ignore, is that the Appellate Court instructed that this case must be dismissed if “it becomes apparent to the trial court that this dispute does in fact turn on matters of doctrinal interpretation or church governance,” which it obviously did. Yet, she evidently told the Commission that she “carefully tracked the guidance provided by the appellate court” (page 4). But she did not, because if she had looked at the facts found through discovery, she would have seen the obvious—that the entire case hung on numerous religious questions. Judge Cordero’s actions put into serious question her legal judgment. That is, to everyone except the Commission. In its report, the Commission wrote that, “Judge Cordero originally dismissed the case on lack of subject matter jurisdiction due to religious abstention” (page 4). However, this is false. The case was dismissed by Judge Anita Josey-Herring in 2013, not by Judge Cordero.  The fact that Judge Cordero did not correct this falsehood speaks to her lack of integrity, her incompetence, or both.

Judge Cordero also evidently told the Commission that her decision “was affirmed on appeal” (page 4). This is another clear falsehood. A simple look at the docket of the case reveals that Judge Cordero’s summary judgement ruling has never been appealed, since the case is currently in the Remedies Phase. As such, there was no way for her decision to be “affirmed” because the case is still ongoing; it is now being handled by another judge, Judge Jennifer Anderson. Judge Cordero should have known that since no punitive action ever took place, there could have been no appeal.

The DC Commission for Judicial Disabilities and Tenure Errors

The Commission’s responsibility is to engage in proper fact-finding, review the statements and documents submitted by the judge, and render a truthful, unbiased opinion for the President’s consideration. In reviewing the statements made by Judge Cordero, the Commission failed in its responsibility. Judging by the myriad inconsistencies and errors in its report, the Commission appears to have rubberstamped Judge Cordero’s submissions without proper due diligence.

Additionally, the report reveals serious contradictions when the Commission blithely dismisses the 5,000 emails it received. The report says the emails “sharply criticized Judge Cordero’s legal reasoning”, but that “that issue is not within the Commission’s purview to consider” (page 4). Yet, bafflingly, in the very same paragraph the Commission says that the rulings for the cases Judge Cordero submitted were “quite persuasive” as well as “well-reasoned, clear and concise, and meticulous as to the facts and the law” (pages 3 and 4). By what parameters, other than “legal reasoning”, can they say those cases were “quite persuasive” and “well-reasoned”? Simply put, it is unfair, contradictory and blatantly dishonest for the Commission to give Judge Cordero this praise, while, in the same paragraph, dismissing thousands of emails claiming that “legal reasoning” is “not within the Commission’s purview to consider”.

Furthermore, the main case in question is still ongoing. No conclusion has been reached. It is common sense that it is improper for the Commission to unilaterally characterize Judge Cordero’s opinion as being “quite persuasive” or “well-reasoned” in a public document when the case is ongoing and is yet to be resolved.  But in its haste to give Judge Cordero the highest possible qualification, the Commission contradicted itself, improperly emphasizing the persuasiveness of her “legal reasoning”.

If the Commission mentioned dozens of cases in its report, then some  mistakes might be understandable. However, the entire report only goes into slight detail regarding one of three cases. And even there they got all the facts wrong. Not only is it troubling that a government agency submits a report riddled with so many factual errors and misrepresentations to the President, but it is also outrageous that Judge Cordero (who surely read the report about her own reappointment after it was published) did not reach out to the Commission and correct the false statements. It is apparent that the Commission is hoping that the White House will simply accept their report at face value and not questions its contents.

Respected President Trump, all of us in “Right to Believe” want honest judges that uphold the Constitution and want unbiased judicial procedures to be the norm in our nation’s courtrooms. And as your voters and supporters, we know that this is your desire as well, as evidenced by your significant efforts to protect religious freedom. The gamesmanship at play to prevent you from exercising your authority in a judicial decision and the ongoing practice of the Commission to give every judge, regardless of qualification, their highest rating at the expense of the values that this nation stands for, must come to an end! We support your crusade to “drain the swamp” and clean up elements that are an impediment to this nation fulfilling its God-given potential. It is shocking to see government agencies, entrusted not only by the President, but also by the citizens of this nation, engage in such unethical practices.

The report on Judge Laura Cordero’s reappointment by the DC Commission for Judicial Disabilities and Tenure reveals the worst elements of cronyism. It demonstrates a willingness to go to whatever lengths necessary to keep stagnant a judicial system that is in dire need of reform. Our entire system is threatened when those in charge of government agencies act as if the laws do not apply to them. When a judge and a government agency take deliberate steps to circumvent the statutory rights of the President to veto and name judges, they must be stopped!

Fundamental procedures and reports, such as the one made by the Commission about Judge Cordero’s reappointment, should serve to make real the notion of “checks and balances”, but they are worthless and a hindrance to democracy if they are not based upon true representation of facts.

We at “Right to Believe” implore you, Mr. President to please direct Counsel Cipollone and your staff to investigate the Commission’s unethical practices and to take whatever steps necessary for the reconsideration of Judge Cordero’s reappointment. If “Right to Believe” can ever be of any assistance, please let us know.  Thank you for your consideration of this urgent matter.