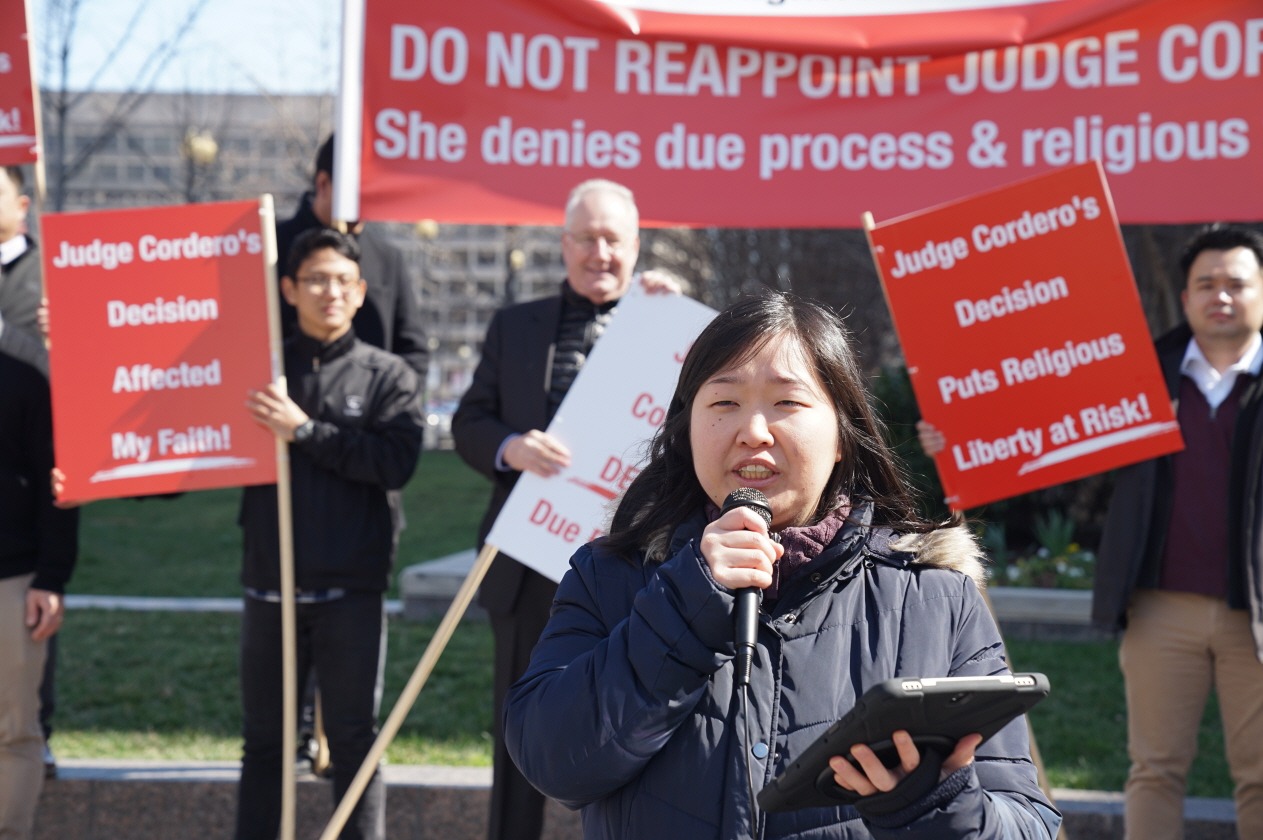 I will be sharing my story with you today, from the depths of my heart. Thank you for lending me your ears.

At the tender age of 15, I met God. Through doing service work in Japan during a summer break, I caught a glimpse of God’s heart and love toward humanity. Despite being ignored or even cursed at by the very humanity that He created, He continues to lead His Providence to bring about a world where we can live experiencing eternal joy and happiness. Deeply moved by this love, I made a promise to God. I told Him, “God, from this day forth, I choose to stand by You. I promise to never leave Your side.” At that young age, I committed my life to God’s Will to bring about a world of true, everlasting peace for all people everywhere, knowing very well that I would probably encounter challenges along the way.

Four years later, at age 19, I found myself standing at one of those challenging points. I came to a crossroads in my path of faith. The spiritual community that I was born into, the community that I loved so dearly and that had taught me about God up until that point—that community started heading in a different direction than I had known—a direction opposite of what I knew was right; a direction that my conscience could not feel at peace with. Corruption took hold, and as I watched the culture change from one of living for the greater good to living for just ourselves, I saw my peers, one by one, lose their faith. Some cried on my shoulder and asked, “Why did this happen?” I stood helpless, because what was I to say? It’s true—the integrity that our movement once had was gone.

At that point, I knew I had to make a decision. Although it was so painful for me to leave the spiritual community and the home I had known my whole life behind, my conscience urged me to seek the path of truth. In times when I wanted to throw my hands up in surrender, my conscience reminded me, again and again, “Remember the promise you made to God.” Ladies and gentlemen, it would have been so much easier to maintain the life I had. But with all the courage I could muster, I made the decision to depart from that community. And in my search, I found the light of truth in my current spiritual leader, who continues to teach about and live to build a world of peace with the God of love and goodness as its center, where all humanity will live as one family.

Ten years have now passed since that time that I stood at the crossroads. And I can say with 100% honesty that I do not have even one ounce of regret. Although it was the most difficult decision I ever had to make, my heart and conscience are at peace. I am confident that I have kept my promise to God thus far.

Ladies and gentlemen, the reason I am standing here before you today is because I feel strongly that the D.C. superior court is stepping on the right of religious freedom—mine, yours, and the freedom of all Americans and all people everywhere—to believe in the religion or faith that they choose. A summary judgment has been made on a court case that impacts my family and people all over the world. The judgment of Judge Laura Cordero declares that my current spiritual leader and community have been doing tremendous wrong over the last 10 years. The faith group that I chose to give my life for is being accused in the most severe way.

This court case is a battle of religious beliefs, at its very core. It is a conflict of religious understanding. Therefore, the court should have dismissed this case as such a long time ago to align to this nation’s First Amendment rights. However, with her summary judgment, Judge Cordero violated that. This is personally offensive to me, but also sets a dangerous precedent for this nation and the world for the courts to have the power to make decisions in religious matters.

I have remained silent for 10 years. But as a person of faith and as a citizen of conscience, I cannot stand by and watch Judge Cordero be reappointed to another 15-year term. Commissioners, please listen to the voices of your people. If she cannot defend the justice of the people of this great nation, then we, as citizens with responsibility, cannot allow her to continue in her position of power!

Judge Anderson, as the judge currently presiding over this case, I am not asking you to agree with my religious beliefs. But one of the most beautiful things about America is that, from the very beginning, the Founding Fathers of this great nation proclaimed that the responsibility of the government of the United States is to protect the rights of the people—one of those rights being the freedom of religion, the freedom to believe. I do not wish for you to be remembered as the one who set a dangerous precedent for this nation and the world. Please, protect the American people! Protect our freedom! And protect the freedom of all people everywhere, for generations to come.