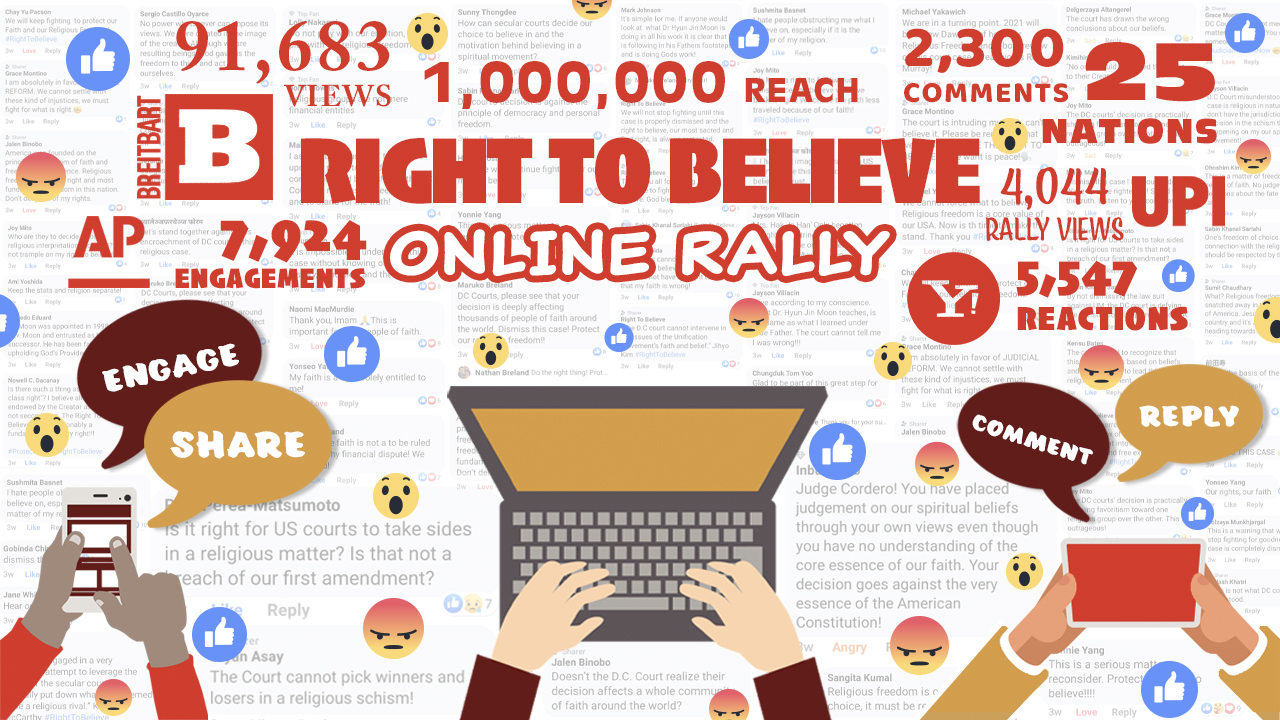 Judge Anderson effectively violated the First Amendment involving the DC Court in matters of defining the theology, structure and leadership of a religious entity, thereby choosing winners and losers in an ongoing schism. Rally participants were particularly outraged that Judge Anderson wrongly accepted “whole cloth” the Plaintiffs’ false cliche`- ridden narrative concerning the main defendant, Dr. Hyun Jin Preston Moon in making her ruling. At the same time, she did not allow the defendants to offer a counter-narrative! Not only did Anderson wrongly accept their false narrative, she proceeded, as evidenced in her written decision, to act more as a prosecutor rather than as an impartial judge.

Judge Anderson proceeded to go against Washington, DC written law when she herself decided the makeup of the board of the religious nonprofit in question, UCI, removing all of the 4 defendants from the UCI board. Her obvious bias against Dr. Moon also led to outrageous “punishment” being meted out to all of the defendants requiring each to pay many millions of dollars. The board members, who are all volunteers, received a level of punishment that would mean bankruptcy for several generations of their families. All of this, in spite of Anderson’s own admission in her ruling, that “the defendant’s received no personal benefits” in their 10 years of running the non-profit!

It has become clear that this case poses a great threat to the basic rights of religious organizations if it is allowed to become legal precedent. (The case is continuing under appeal) During the rally itself, there was very active participation by the thousands who joined in from around the world. The glaring threat to religious freedom that this decision poses for all non-profits and all religious groups has led to a tremendous increase in interest in this case. Press releases about the rally and an article on this case and its impending threat written by Howard Self, President of Right To Believe, were published by UPI, reposted by Breitbart, Yahoo News, and picked up by law and religion sites, reaching a potential audience of millions. (See UPI article here: Governmental Overreach Causes Growing Alarm for Religious Groups)

Right To Believe will continue to bring attention to this most vital case, until true justice is obtained.