Speaking Out to Protect Our Sacred Freedom of Faith: Naomi MacMurdie 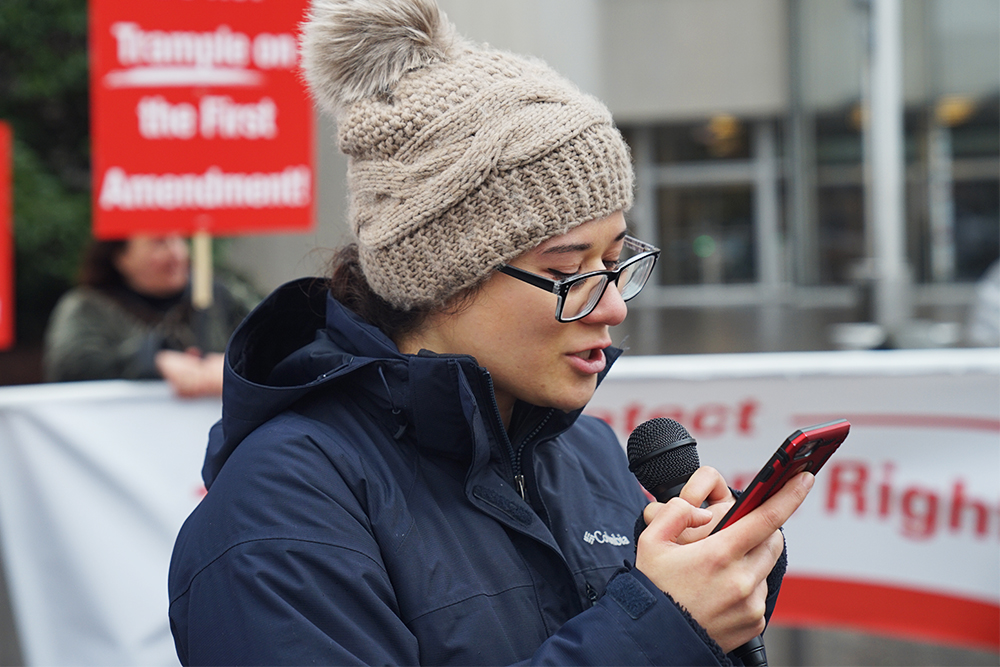 Judges of the DC Superior Court and Americans who care about religious freedom, I am standing here because I can no longer silently suffer as the court infringes on my sacred freedom as a human being and as an American citizen.

I wrote a letter over a year ago to the DC Superior Court to respectfully urge them to consider the negative consequences of their decision to take sides in the religious dispute between Family Federation and Dr. Hyun Jin Moon. The DC Court ignored the clear evidence provided and it has essentially taken one religious group’s theology over another, deciding which view it deems right and which it deems wrong and to be punished.

As a person of faith, as an American citizen, and as a human being with fundamental rights given by my creator, I’m speaking out to protect not only my freedom but that of all people to practice their faith.

Because my parents belong to a controversial new religious movement, I was born into a life of religious persecution. But I was raised to respect all people no matter their religious beliefs, because my parents embraced Rev. Sun Myung Moon’s core teaching — that we were all one family.

We are not just part of a church, but a movement for world peace.

For 18 years, I had practiced my faith peacefully, and served my community. Ten years ago, I was suddenly ostracized by the people in my own faith community, because I decided to support the work of Reverend Moon’s son, Dr. Hyun Jin Preston Moon.

To me Dr. Moon’s work was a natural progression of what I had done my entire life based on the spiritual principles taught by Rev. Sun Myung Moon, which his son was continuing and expanding through a global movement for peace.

According to my faith, this is impossible. How could something given by God be taken away by an institution? I knew the Family Federation had changed. I put aside any personal inclination to conform, knowing that my family was being ostracized because of our very difficult decision to follow our conscience and support the one standing firm for God despite tremendous persecution.

I loved the community I was born into. I always will. My heart still breaks a decade later.

But I will not be silenced. I speak for the freedom of all people to listen to their conscience to pursue a higher spiritual truth.

The DC Court erred when it decided to intervene in a major dispute of theology and practice in a new religious movement.

Take it from someone who has lived this life who saw the injustice done to good people.

Many have remained silent because of the pain, injustice, and fear of persecution. But now, when religious freedom is threatened in the courts of our nation’s capital, we will proclaim our stories to alert all about the implications for the freedoms of people throughout our country for many years to come.