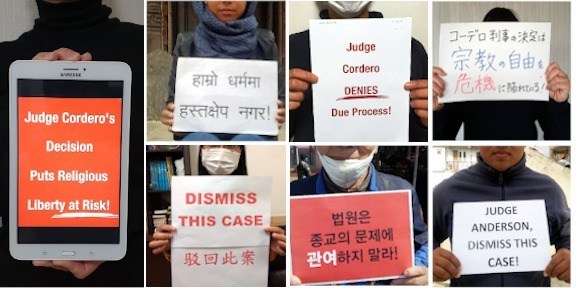 Across our nation a groundswell of alarm is rising among people of faith as judges increasingly disregard their First Amendment rights. Legal challenges to religious expression began with attacks on displays. A manger scene here, an outsized cross erected after one of the world wars there. The assault on religious freedom then escalated to attacks on the personal actions of individuals striving to live according to their religious convictions – a Christian cake baker here, a high school football coach who dared to pray after the game there. This fast-growing national legion of concerned citizens will no doubt be deeply concerned by the dangerous precedents being set in a case now before the Washington, D.C. Superior Court.

That case, “Family Federation for World Peace and Unification, et al v. Hyun Jin Moon, et al” (Case No. 2011 CA 003721 B) has dragged on for more than nine years and threatens to dramatically intensify attacks on believers to include the hostile takeover of a religious nonprofit’s board AND, in effect, the court-ordered subjugation of an entire faith community—lock, stock and barrel. The disputes in this case are the result of an ongoing religious schism within the Unification Movement founded by the Reverend Sun Myung Moon, which developed a few years before his passing in 2012.

Even a cursory look into the Unification Movement’s schism clearly reveals a classic religious dispute that involves every aspect of religious practice – leadership, structure, and theology. It began when Mrs. Hak Ja Han Moon, aided by some of her children and corrupt leaders, hijacked key organizations intending to wrest control of the movement from the rightful successor, Dr Hyun Jin Preston Moon.  The divides over rightful leadership then further deepened into major disagreements about the structure of the Unification Movement and even about essential tenets of its theology.

Given the clearly religious nature of the dispute, in 2013 Judge Anita Josey-Herring correctly assessed that this case would require the court to delve into religious matters. Since the First Amendment prohibits such intervention by a court, she dismissed the case. However, the DC Appellate Court decided that the case should be reviewed more thoroughly before a decision to dismiss and sent it back to the DC Superior Court.  Most notably, the appellate ruling specifically indicated that the case should be dismissed if, “it becomes apparent to the trial court that this dispute does in fact turn on matters of doctrinal interpretation or church governance.”

The continuance of this case has primarily benefited lawyers from both sides who have gleefully collected hundreds of millions of dollars in legal fees! Fees paid from the donations of the very religious movement being ripped apart by the lawsuit itself.  The defendants, led by Dr. Moon, the designated successor and eldest living son of Reverend Sun Myung Moon, have already been severely harmed… for simply following their sincere religious beliefs and conscience in running the nonprofit, “UCI”. Not only the defendant UCI board members, but also tens of thousands of members of the Unification faith have been harmed by this court process. The precedent set here is a major threat to religious freedom for all religious nonprofits, very few of which could survive such a drawn-out legal onslaught.

As this case has dragged on through the DC Superior Court over nine years, it has changed hands from judge to judge numerous times.  The incompetent handling of this complex case by the DC Courts is both startling and disturbing to all defenders of the First Amendment.

Unfortunately, the parade of judges collectively extended the case to absurdly costly lengths, issuing ruling after ruling that further harmed the defendants while ignoring the First Amendment AND due process.  Judicial overreach has been the name of the game in the DC Superior Court!  For example, when Judge John Mott presided over this case, he prohibited the defendants (the Board of UCI) from providing financial support to several nonprofits (organizations focused on peacebuilding internationally) for which UCI was the founding major donor. This spurious ruling, issued even before the determination of evidence in the case, immediately harmed thousands of volunteers and employees globally.  How can a court of law decide which religious purpose more appropriately advances the teachings of a given religion? How can a court of law determine that one religious purpose is more “correct” than another without delving into religious matters? How does a court of law interpret deeply held religious beliefs and unique religious terms, without delving into religious matters?  A court could only do so by intervening in religious matters, which is strictly prohibited by the First Amendment.

Another DC Superior Court judge, Judge Laura Cordero, violated the rules of Summary Judgement by embracing the plaintiff’s fictional narrative outright in a heavily contested case without any due process for the defendants. Despite a mountain of evidence about the religious disputes and schism, Judge Cordero did not convene a hearing nor hear from the defendants at all before issuing her ruling. This is exactly what the First Amendment was established to prevent… a Judge (or any other governmental official) interfering in the free exercise of religion!

For the defendants in this case, it is as if there is no First Amendment! This ruling caused an enormous uproar. When, soon after, Judge Cordero came up for renewal of her judicial appointment, the DC Commission on Judicial Disabilities and Tenure (the “Commission”) received over 5,000 messages from supporters of religious freedom, decrying Judge Cordero’s callous dismissal of Constitutional rights in this case, expressing their outrage for religious discrimination, and urging that her reappointment be denied. The purpose of the DC Commission is to ensure that the courts of the nation’s capital have competent judges.  One would think that the Commission would have seriously considered such a significant outcry about ineptitude and discrimination in the DC Court system. But, NO! Indeed, the Commission gave Judge Cordero their highest possible rating! Its decision automatically provides Judge Cordero with another 15-year term on the bench and a lifetime pension…of course, at taxpayers’ expense. A judge, who intervened in a clearly religious dispute, disregarding the First Amendment, and who set a dangerous precedent for all board-governed religious nonprofits in DC, was automatically reappointed by the Commission. Even the Commission’s official report on this reappointment was fraught with errors, which the Commission acknowledged but is unwilling to fix.

An examination of the Commission’s history reveals a disturbing picture and helps explain how a judiciary system can become insular and self-serving. According to information publicly available on its website, the DC Commission examined and ruled on the re-appointment applications of 31 judges in the last 13 years. In every single case, the Commission has given the judge in question its very highest rating!  That fact alone should raise serious concerns about the credibility of the process. Those who have had dealings with the DC court would scoff at the claim that the system has only judges of the highest competency.

The Commission, a small body that always includes former judges and others connected to legal circles in the District, is totally insulated.  A review of its rating system is quite telling. When it grants an applicant its highest rating (“well qualified”), by law that decision cannot be reviewed or overturned… not by the Mayor, not the Congress, not even the President.  On the other hand, if the Commission were to rate a judge one step down (“qualified”), which denotes some question about qualification for reappointment… then the EXECUTIVE BRANCH of the Federal government becomes part of the decision-making process. Yes, that’s right…the duly elected President of the USA.  By giving every judge its highest rating, the Commission effectively circumvents the Executive Branch (whether Democrat or Republican) from examining the qualifications of a given judge and determining the outcome. What is the overall effect of this “system”? Incompetent judges have nothing to worry about in the DC Superior Court arena!

With a review process that is a de facto rubberstamp, judges in the Washington, D.C. court system face few constraints on their authority. Judicial overreach appears to be a clear pattern, especially when it comes to matters connected to religion. The Washington D.C. judges are not God; they just appear to think that they are! It is an imperative that Congress takes action to end this farce playing out year after year. Congress should overhaul the Washington D.C. judicial review system so that there is genuine oversight and credible assessment of judges. The citizens of the District and nation deserve no less.

If the case of “FFWPU, et al v. Hyun Jin Moon, et al” proceeds along its current trajectory, with the court willingly ignoring its serious religious freedom implications, then, a very dangerous precedent will be set that threatens the very existence of religious non-profits and entire faith communities. If the DC Court can decide what is the true purpose of a religiously inspired nonprofit, if it can determine how that religious nonprofit should or should not use its assets, and if it can choose sides amidst a religious schism while ignoring basic First Amendment rights, then the door will open for ANY faith to be so challenged.

There is, however, a possible champion for justice in this scene now. Judge Jennifer Anderson now presides over this drawn-out case. She can do the right thing – uphold the First Amendment and dismiss the case, as the preponderance of evidence demands and as the first judge ruled. In so doing, she can bring a margin of respectability to this court. Or, she can ignore the evidence in her ruling, to her discredit, and be overturned on appeal. The eyes of the nation are now upon her.

Right To Believe is a not-for-profit organization whose mission is to uphold the fundamental rights of religious freedom for all. We include tens of thousands of individuals who are fighting to protect the right to believe in one’s religion without undue governmental interference.